The Eyes Have It (by Joy Preble)

When I began writing what would eventually turn into the DREAMING ANASTASIA trilogy, I always envisioned Ethan with stunning blue eyes. The kind of blue that makes you stop and do a double take. I honestly don't know why. I just know that's how the character came to me. And those eyes became part of what attracted Anne and part of what made him a little strange and mysterious because that kind of stunning blue just stands out, you know.

Actually, this is model the cover artist used for Ethan. 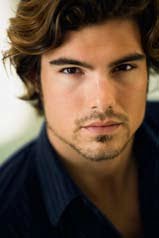 And then she blue-d up his eyes a whole bunch and put him lurking in the upper left corner of the book so that it looked like this: 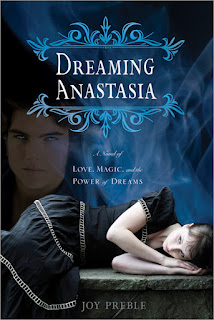 Interestingly, when Sourcebooks first printed advanced reading copies, Ethan was not on the cover! But the chatter, esp. in Europe at Bologna Book Festival, was that something was missing. Duh! Ethan and his blue eyes.

Now let me say that this is a physical feature that not only distinguishes Ethan in the series, it is also reflective of what his character is NOT. Let me explain. So here's this hot dude with these amazing eyes, but as a person, Ethan is amazingly obtuse sometimes. He misses things. He makes HUGE mistakes. He trusts the wrong people. In metaphoric terms, he just doesn't see real well. Of course in book 3, the reader will learn the deepest and darkest of Ethan's misjudgments.... And to reflect that, if you look carefully at the new ANASTASIA FOREVER cover (AF will be out August 7th!), you will see that Ethan's eyes are much, much darker too! 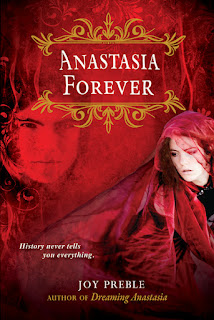 Which I think is totally cool of Sourcebooks and my editor Leah Hultenschmidt and very indicative of the darker nature of the entire 3rd novel... and if I say anymore I'm going to spoil something I am sure!

Anyway, Ethan's eyes. Actually a big part of the series!
So yeah, the eyes have it, people. Yes they do.