My current work-in-progress (which I've been referring to as the Modern Myth YA) opens the morning after something really major and awful has happened to my main character Dee. This is one of the ways she reacts to it:


I hated how she—how I—still looked like the same person who had gotten out of the shower yesterday. Well, aside from the signs of a raging hangover and the bruises, but those would fade. They were not the jarring, permanent physical change that I expected—no, that I needed if I had to continue operating this body that felt like a desecrated corpse.
The answer came when I tried to run a comb through my wet hair and it snagged, radiating pain through the roots into my skull.
My hair had hung halfway down my back for as long as I could remember. It was straight as a bone and nearly that color, though Gran liked to say my hair was moonlight and my sister Seph’s was sunlight. I knew from photographs that Seph had inherited her golden-hued loose waves from our mother. She’d also gotten the bright greenish-blue shade of Mom’s eyes whereas mine were the pale silvery-blue always described as “piercing” in articles about our father. These differences were subtle enough that strangers used to ask if my sister and I were twins. That stopped four years ago when everything about Seph got longer, especially her legs. Suddenly she stood a head taller than me and her sharp cheekbones and thin face—the only features she shared with our father—made her seem more than a year-and-a-half older. I never caught up, but we’d still looked a lot alike until she started screwing around with her hair.
I reached into the medicine cabinet for the shears that Seph had used last year when she cut her waves into a jagged, uneven bob that barely grazed her chin. That haircut was nothing compared to the one I wanted. If we’d had an electric razor, I would’ve used it to shave all the way down to my tender scalp. Since we didn’t, I hacked away with my sister’s scissors until heaps of blond hair filled the sink basin.
The few inches that remained on my head stuck straight up when I ran my fingers through. It was too short to grab and hold on to now. No one would ever be able to use it to trap me again.


In my first book, I WANNA BE YOUR JOEY RAMONE, my musician main character like many rock stars has a signature hair style, which was captured in this rejected cover of the book... Well, it's close, but Emily actually has jet black hair and when she has a major crisis in her life, she bleaches it blonde.

In my second book, BALLADS OF SUBURBIA, when I got my revision letter from my editor and she noted that I wasn't given the reader a vivid visual of my main character Kara, the first detail I worked in was a description of Kara's hair and as her life changes, so does her hair.

And now we've stumbled on a little trend in my writing, haven't we? I didn't do this on purpose across all my books. In fact, it wasn't until I started pondering what I might write about for our appearances theme that I realized I was doing it. However, I'm not surprised that I've given most of my main characters this quirk. This is a clear case of when an author's real life/mentality bleeds into their fiction. 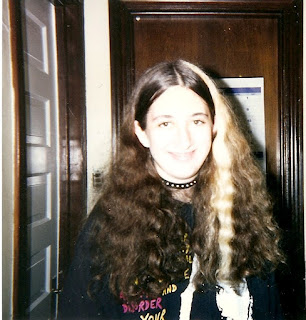 My best friend and I became aware of this pattern in our own lives back in high school. She noticed that whenever she got the urge to change her hair, shortly after that she broke up with whomever she was dating. It was like she was subconsciously aware of the major change she needed to make and started by taking it out on her hair. It was sort of similar for me except generally I would know I wanted something to change, that I wanted to feel differently somehow, so I would start by changing my hair and then ride the energy that gave me. For example, my sophomore year of high school, I decided I wanted to be more social and outgoing, and well, get a life, so I got this blond streak in my hair and it made me feel bolder.

A year-and-a-half after that, much like my character Dee from above, I'd gone through a really difficult period and was struggling with that fall-out of an emotionally abusive relationship, so I felt like I needed something drastically different because I wanted my life to be different. Then I went full-on blonde. 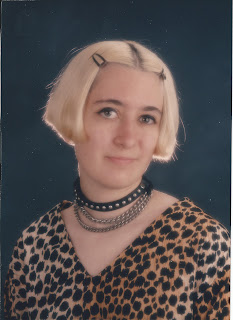 That is actually my senior photo, though a few months after it was taken, I was on the verge of another major change in my life--graduating early and moving out on my own--so I decided to make another big change and dyed my hair jet black. My yearbook pictures in high school were almost always outdated by the time the yearbook came out because I would change so much in one year.

This wasn't just a teenage thing for me, though. I had a couple years of very normal hair (well, normal for me, which meant it was a more subtle reddish brown) mostly because I was working a very normal (and awful!) office job. When I WANNA BE YOUR JOEY RAMONE came out, I decided to dye my bangs pink in celebration. 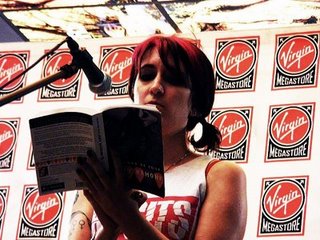 My best friend said, "This means you're quitting that job, doesn't it?" I hadn't entirely intended to. My boss would have let me get away with the pink bangs, but my best friend knew me better than I knew myself. On the inside, I was screaming for change and I used my hair express it. Sure enough, when I came back from my time off to celebrate my book, I put in my notice and decided to go back to work as a bartender, the job I'd done in grad school, which gave me more writing time. It also allowed me to do whatever I wanted with my hair, so for the past four years I've been switching up the color of my bangs, I've had  several shades of pink, blue, purple, bright red, teal green, sometimes I'll do a couple different shades at once.

Lately, I've felt stuck in a rut--with writing, with my job, with where I live, everything. I can't make any drastic immediate changes to any of it, but I needed to get out of my funk. This weekend when I went to my stylist, she suggested that we keep my colorful bangs, but add some blond chunks to my hair. It's been ages since I've been blond or even blond-streaked. (The last time was in 2005... right before I broke up with my boyfriend of 8 years. I went back to dark hair in mid-2006, right before the "real" job and right after I met my now-husband.) I hadn't even told my stylist about how stressed and uneasy I feel about my life, but it was like she looked into my soul and knew 'This girl needs energy, she needs a change in mentality, she needs to feel bold and ready to take on the world. She's needs some blond in her life!" So, even though my horoscope said not to make any drastic changes in appearance, I went for it, and here is the result: 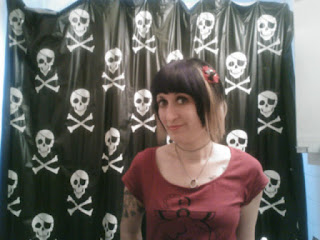 My bangs, though you can't really tell from the photo, are purple, which I chose on a whim and also because I figured if I didn't like the blond, I could cover them with pink and it would look cute. But perhaps the purple was a subconscious choice to because my mom is always saying, "Purple is a high energy color."

I'm hoping my new 'do will spark some much-needed change in my life or at least in my mentality. It's worked for me since high school and it works for characters in just about every book I write. What about you? Do you find yourself making changes to your appearance right before or after major life changes?
Email Post