Appearances can be deceiving

I'm not that much into writing about appearances. 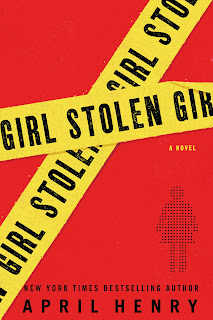 Cheyenne, my main character in Girl, Stolen is blind. So she doesn't spend a lot of time thinking about appearances, either hers or others'. For example, this is about all Griffin, the other character, notices about her after he steals the car she's been lying down in:

The girl in the backseat wouldn't stop yelling. She had black hair and huge brown eyes, wide with fright. Maybe she was pretty. Griffin didn't know.

Being kidnapped is bad enough, but being kidnapped and blind would be horrible. But appearances can be deceiving. Cheyenne ends up proving her own strength time and time again.

In my next YA, due out in May 2013, this is about all I have to say about the main character:

I kick through the mess on the floor, push the coat aside and stare at myself in the mirror. At me. At who I must be.


Only it’s a face I don’t recognize.


Snarled blonde hair that falls to the shoulders. To my shoulders. Fifteen, sixteen, seventeen? Wide blue eyes. Straight nose with a bit of a bump at the bridge. Lips that look swollen. Skin so pale that the freckles on my cheeks stand out like flecks spattered from a paintbrush. Am I always this pale or is it from shock and blood loss? What I think is the beginning of a bruise shadows my jaw. My heart pounds in my throat and bloody fingertips. I want to throw up.

[Aside: I would tell you the title, but I've just leaned Sales didn't like the working title, Finish Her Off, so let's just call it The Book About the Girl Who Doesn't Remember Who She Is or Know Why People Want to Kill Her.]

Hidden talents
When I first got the idea for this book, I loved thinking about a girl who discovers she has some hidden talents.  Like this:

I spin around to face him. His eyes are half closed in pain. Blood runs from his nose, red as paint. His right hand reaches out to grab me. My left hand rises, bent at the wrist like the neck of a crane, and knocks his hand away. Then my hand snaps back and claws down, fingers spread, my remaining fingernails digging into his cheeks, leaving furrows that immediately fill with blood. He cries out and puts his hands to his face.


Leaving his throat unprotected. I draw back my hand, my fingers close together and bent at the second knuckle. And I drive them into his throat as hard as I can.


And then he’s lying flat on his back, not moving.


I’m not even sure he’s breathing.


Whoever I am, I already know how to do this.

For me, I would much rather write about a character who is not exactly what they appear to be on the outside.