At first I'd planned to write an emotionally vulnerable post about all the things that scare me and how, even though it's hard, I've learned that fear must be faced head on blah, blah, blah...

Instead I'm going to write about the Apocalypse. Deep in the secret recesses of my mind I sort of picture myself like Katniss Everdeen. 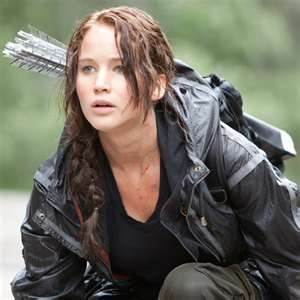 Cute, but kind of a badass with the ability to bring it in times of emergency. Sounds good, right? So not true. I'm a powder puff. Okay--maybe not as soft as a powder puff, but I'm going to admit it--my feet sweat when I think about the Apocalypse. When I read books like LIFE AS WE KNEW IT by Susan Beth Pfeffer, I realize that I'm completely unprepared for life without heat, showers and chocolate. Oh, and refrigeration, clean laundry and toilet paper. *head thunk* Need I go on, because I certainly can if your imagination has not been jump started yet. 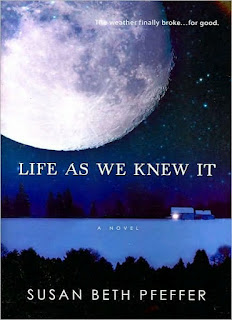 What brought on this wave of fear? Don't laugh at me, but my Mac Book Pro is having a temper tantrum. It is being as obstinate as a toddler who is holding out for a cookie. I can't get anything to work on it. Of course, I'm dropping everything and heading to the nearest apple store, right after a good breakfast (you should always stay fueled in case of emergency) and I fully expect the Genius Bar to work it's magic and make my life all appley again, But it got me thinking about what happens when the electronics don't work, when the power goes out temporarily or what it might be like if it went out permanently. *shudders*

The truth is I would likely still be able to read and write. Unless we've sunk to burning books for heat instead of ignorance and I'm spending so much time weaving new toilet paper that I fall over into a dreamless sleep, I shouldn't have to be derived. And the truth is, that long before books were in print, stories were shared orally around the camp fire and that means they were written in the imaginations of those who had art in their soul. So even a lack libraries, paper and pencils can't steal my passion completely.

So, while I'm still terrified of the Apocalypse, pretty confident that five days without power has the ability to send me into a tailspin and I know that 24 hours without a working lap top makes me nuts (even when there's another computer in the house) I'm comforted to know that if the stuff hits the fan--I'll always have my imagination and lots of really scary stuff to fuel it. LOL!

What would scare you the most about the Apocalypse coming and what would you be able to keep, no matter what scary stuff is going on around you?
Email Post
Labels: KImberly Sabatini Scary Stuff The Apocalypse