Facing my fear - with gloves on


I am a martial artist. I almost feel as phony saying that as I did for years when I told people I was a writer and felt like a faker. My love for martial arts would surprise anyone I went to high school with, because PE was the only reason I graduated with a GPA less than 4.0. But it turns out that martial arts have helped me be a better writer (after all, mysteries and thrillers often contain an element of violence), as well as a stronger and more prepared person.

For me, a kickboxing class was the gateway drug to martial arts. As part of the class, we wore boxing gloves and hit bags. I had never hit anything, not even a bag, as hard as I could. It made me feel strong, and it was a great workout.

Over the past three years, I have seriously trained in  kajukenbo and kung fu, as well as taken a little bit of Muay Thai.  I have an orange belt in kajukenbo (and was close to taking the test for purple belt when our sifu left).  As for kung fu, I test for my orange belt next month.

Facing my fear - of hitting and being hit
I particularly love sparring, even though it can also scare me spitless. At my school, I’m often the only woman sparring. I’ve spit blood afterward when I forgot to wear a mouth guard. I’ve told my doctor not to worry about the bruises on my arms from blocking blows.

And even though there are many times when I get to the door and have to resist the little voice that tells me to turn around because there are new guys in class and they all seem to be about six foot four, or that there’s a new sifu filling in for our regular teacher, or simply that I’m really tired, I’m always glad at the end of the sparring class. Afterward, I walk to my car, grinning like a fool. 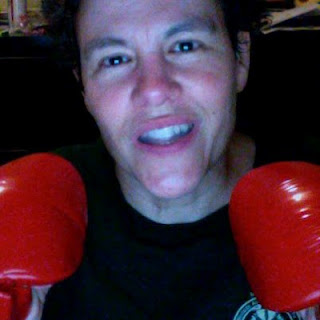 First of all, sparring has taught me what it feels like to get hurt or simply experience the surprise getting hit in the face. In our culture, even close friends don’t touch our faces, let alone hit them. Knowing a little something about surprise, pain, and fighting back, helps me write about them.

I now can write authoritatively about being afraid and fighting back, about how things blur, about the way people move and hold their bodies and eyes and mouths. Now I can often tell when someone is about to hit me and where. The eyes focus, the breath catches, the shoulder drops or the hand goes back.

I also know how to hurt people - and that means my characters might be able to do it, too.  Kajukenbo focused a lot on what are known as “grab arts” -  how to get free if someone grabs your wrist, tries to strangle you, or wraps you in a bear hug.  All this has come in handy for my characters.

In my school’s kung fu, we also learn to grapple - ie, to wrestle on the floor.  As a woman, these scenarios make me uncomfortable. I don’t want some guy on top of me, even if by day he is mild-mannered computer programmer or corporate lawyer.  But as a woman, this type of situation is one I might face some day.  Now I know what to do if it happens (and so do my characters).