IF YOU GREW UP IN THE 80’S, HAD AN UNFINISHED BASEMENT, AND A SICK FAMILY, YOU’RE PROBABLY LIKE ME. 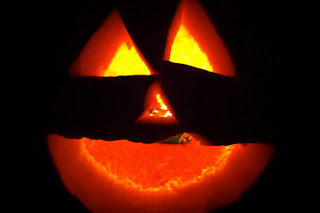 …which is to say, a big scaredy-cat. You’re probably still scared of the dark, and at night, when you turn off all the lights, you probably hold the back of your neck and run like a crazed chicken while reciting the alphabet and then fling yourself on to your bed so that whatever is under there (and there is something under your bed) doesn’t grab your ankles and pull you down,
down,
down,
down into the depths of hell!

Yep. This is pretty much what goes through my mind when the lights go out. While I’m at it, I’ll confess that I’m also afraid of aliens, ghosts, hauntings, possessions, and any and all television shows about aliens, ghosts, hauntings, possessions, etc.).
See, some part of me is absolutely convinced that if I watch a show about aliens, I will shortly thereafter, be abducted. If I watch a show about a haunted house or a possession, I’m opening up some sort of wormhole through the tv and I will then be haunted or possessed. If my house is too cold, I honestly think some spirits have decided to make themselves at home.

There’s a part of my brain, I promise you, that is logical and rational and tries to talk myself out of these thoughts. But for the most part, it doesn’t work.  Looking back on my childhood, I can’t imagine why. But here are my best guesses:

THE 80’S REARED A BUNCH OF KIDS TERRIFIED OF THEIR OWN SHADOWS
I mean is it just me, or was this the decade of horror flicks? Friday the 13, Nightmare on Elm Street, Halloween, Poltergeist, Amityville Horror and The Exorcist.  I watched all of them, and you know, this at the ripe old age of 8, 9, 10, 10 and 3/4.  Also, I made sure to watch parts II, III, XXVI, of all above mentioned movies. Ah, and let me not slight Carrie, Christine, Pet Sematary, and some other Stephen King movies I’ve mostly blocked out.

MY BASEMENT WAS A CRYPT
When I was little, my toys were designated to the basement so they wouldn’t clutter the house—the unfinished basement that was gray and gloomy and had a coffin in the corner. Fine, it was actually an old school, huge, black water boiler, not a coffin. But it looked like a coffin to me. And I was pretty sure it was going to bust open and the zombies from Michael Jackson’s Thriller video would appear.  (yes, that’s right, toys in the basement. We also had plastic covers on our couches.)
Also, in that same basement was my father’s workbench with all his tools including a chainsaw and a machete, both of which I always imagined were going to come to life, fly off the worktable, and kill me (not sure where this came from, but I’m sure from one of the above mentioned movies).

MY FAMILY WAS A BIT SICK
My mom, for reasons unknown to me, thought it was very funny to scare me. She will deny this of course, but she did do this. Many times. And when a favorite cousin of mine with a sick sense of humor would sleep over my house, and we’d settle down to sleep in the pitch dark room, she would pretend she was possessed complete with the demonic voice and third person reference. Oh, and she would not stop.I found this to be so horrible and traumatizing, years later I would do the same to my little brother (sorry, Dave).

Looking back, I suppose there was basically no avoiding becoming a paranoid basket case that gets spooked at the slightest creak.  But oh well, I’m sure it made me a better person, in some way.

*cue in little brother reading this a week before posting*

Dave: You also locked me in the garage, turned off all the lights, and did that possessed voice from the other side of the door.
Me: What? No I didn’t (grin).
Dave: You did. Several times. For a long time.
Me: Really? (laugh) Oh man, that’s so mean! (laugh) I was hilarious!
Dave: Yeah. Hilarious.
Email Post
Labels: fear Jenny Torres Sanchez