Fear Motivates. Plus It's Scary-- by Joy Preble

What scares me?
Lots of stuff. It is, as they say, a scary world.
But that’s okay.
Fear’s a great motivator, at least for me. Nothing that I’ve ever done that’s been worth doing has come easily. Fighting the fear has been a large part of what’s driven me forward.

Change careers midstream, querying for agents and writing novels and getting to know and understand an entirely different industry while still teaching 175 students per semester and being there for husband and son? Totally terrifying even as it energized me. New rules, new friends, new colleagues, new everything. It was exactly what I needed to be doing, but yeah, it scared – and sometimes still scares – the pee out of me. 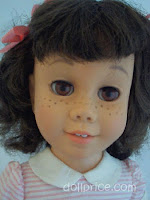 Psychologically scary movies frighten me, too. Anything about possession or hauntings or things that go bump in the night or dolls that come alive and rustle in your bed or whatever – eek! I think it’s the loss of control thing mostly. That you could be bopping along and suddenly your head is doing the full Exorcist twist or your Barbie is trying to knife you or suck out your soul? That’s just creepy. At least until the movie’s over and we go out for coffee or margaritas or whatever the mood calls for.

(full disclosure: When I was five and six I totally believed that my dolls came alive at night. So I always slept facing the wall of my room, away from the dolls, so I wouldn't see them doing whatever it was they planned on doing once the lights went out)

But saying Hey, I’m going to write books for a living – or at least part of a living- and I’m not going to stop until I’m successful at doing what I’ve always dreamed of doing? Now that’s belly-clenching scare stuff. Because let’s face it: Lots of people don’t. And when you’ve been doing and being one thing for a number of years, you realize that you’re going to lose some things even as you gain what you need and want. Some old friends will drift and your family will have to adjust and the dust will build and you will be you, but a different you because you’re finally doing what you’re supposed to be.

There are two types of fear, I think. The kind you should listen to and let guide you to STOP. LOOK BOTH WAYS. DON’T GO THERE. And then there’s the kind that pushes you to new horizons. The kind that says, girl, you are totally terrified that there is something else out there, but you’re going to have to find out what it is anyway.

The trick is know the difference.

So how about you? What scared you but was actually the thing you needed to be doing?
Email Post