A few days ago I got to thinking about how easy it is for us to see almost any television show or movie we want now. Though it gets more complicated with older productions, between OnDemand, Netflix, Amazon Instant Video, Apple, and whatever happens to be in the current schedule of most cable channels, there's a good chance you can find what you want. At worst, you might have to pay a rental fee or—at worst—buy a digital copy. (I know there's also the option of torrents, but as a guy who wants people to legally acquire my work, I'm not going to go pirate movies or TV.)

Of course, it was not always this way. For those of us who qualify as olds, we remember a time when we were beholden to the programming decisions of network and local TV executives. Or maybe we'd have access to an art house theatre that showed classics, but still it was all about waiting. Once a year, I remember, CBS would show The Wizard of Oz. That was something of an Event for me, though the first few times I saw it we had a black-and-white TV so I didn't quite get what made it special. We also looked forward to annual holiday specials, and would sometimes try to remember to catch summer reruns of shows we missed during the regular season. But it wasn't until I graduated high school that the age of the VCR began and we had a little more control over what we watched—and when.

All this may be why my own teen celebrity crush was particularly piquant and long-lived. Had it been as easy then as it is now to binge and obsess on a single show or film, or actor, I might have burned through my obsession in record time. Instead, my crush on Hayley Mills dragged on forever.

Now, it wasn't just Hayley Mills, but a very specific Hayley Mills—two of her, in fact. I was utterly infatuated with Susan and Sharon in the original The Parent Trap. And damned if I didn't spend months and sometimes years waiting for a chance to watch it again. 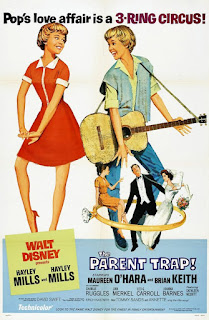 To be fair, my Hayley Mills crush started when I was not yet a teen. My first viewing of The Parent Trap happened when I was nine, and I didn't even see it from the beginning. It must have been a Disney Sunday night broadcast, and in all likelihood I ran late doing the dishes. As a result, at first I thought Hayley Mills was two people, and I loved both of them from the get go.

Nowadays, if I start a movie midstream, I just pop into IMDB on my phone and check out the details to get caught up. But in 1972, I wouldn't have known how to find out about an 11-year-old movie or the "twins" who starred in it to save my life.

Fortunately, within a year I got a chance to see the movie from the beginning and then, frankly, I was even more enthralled. One person playing two people? Crazy! (To be fair, I'd seen the "Mirror, Mirror" episode of Star Trek by then, but Goatee Spock and Regular Spock were in two different universes! Not the same thing as the twins pranking each other at camp or doing that goofy dance routine together. Here was clearly an actress of sublime talent! To be sure, prior to The Parent Trap, my idea of the pinnacle of cinematic achievement was Bugs Bunny in The Rabbit of Seville. That's not so say I don't think Hayley Mills was (and is) a talented actor—I do!—just that as a ten-year-old I lacked the knowledge or experience necessary to render an objective assessment of her abilities.

The skill I did have was the ability to read the TV Guide. And that second viewing started a multi-year cycle of poring through each issue checking to see when the next broadcast would be. Fortunately, those turned out to be more frequent than a less accessible film might have been. The Seventh Seal wasn't going to show up on the movie schedule of my local independent TV station nearly as often as the effervescent fun of The Parent Trap.

More than once I skipped other activities, including school, to catch a showing of The Parent Trap. A trip to King's Island? Uh, not if I have to miss, "Let's get together, yeah, yeah, yeah." If it played during an afternoon when I had chores (which, actually, was all afternoons) I'd gladly take the grounding rather than miss the movie just to vacuum or whatever. By the time it would be broadcast again, I'd be off grounding anyway.

As I got older, my view of the movie began to change. With frequent viewings of anything, you see what you missed the first (dozen) times. For example, the splicing of Hayley talking to Hayley started to become more noticeable. That wasn't a ding against Hayley herself, of course. But the similarities between Sharon and Susan, despite their rather overblown city girl/country girl tics, did start to indicate a certain lack of range. Hayley was delightful, but Tatiana Maslany she was not.

By the time I was an actual teen, some of the luster began to wear off. The movie world was changing in dramatic ways by then—we were nearing the arrival of Jaws and the advent of the summer blockbuster. Acting was changing, film was changing. And I was changing.

I was thirteen when it suddenly struck me just how preposterous the premise of The Parent Trap really was. I mean, think about it. How does a couple decide, no matter how they feel about each other, to split up sisters, move to opposite ends of the continent, and then spend years pretending the other child doesn't exist? What would they have done if they had only one baby? Split it in half in a grim, King Solomonesque bargain. That would have given us a very different, if potentially intriguing, movie.

And in any case, even if such an arrangement might have happened in the weird social milieu of 1961, two people who disliked each other enough to cut off all contact for at least a decade aren't suddenly going to fall in love again via a whacky camping trip and a song-and-dance routine performed by their utterly adorable daughter(s).

That last realization was probably the beginning of the end for me and Hayley. Clearly I conflated her with the roles she performed, and if I didn't believe in the story, I couldn't quite believe in her either, could I? Then little things started to seem troubling or annoying. The amusing old reverend who ogled Maureen O'Hara turned into a skeevy old lech. And that house—that ridiculous impossible house. And what did these people do anyway? Just be rich all day? Gross.

None of that is to say my infatuation with Hayley soured exactly—but it did fade. By my mid-teens I had seen her in some other movies, and it slowly sunk in she was an actor, not the spunky Sharon/Susan who had captured by nine-year-old heart.

Looking back, it's kind of funny to think about the obsessive way I searched the TV Guide for my next Hayley sighting, but at the time I think I needed that silly movie and my imagined idealization of the girl who starred in it. If nothing else, the crazy antics of Sharon and Susan showed me a way in which kids might take some measure of control over their lives. Sure, The Parent Trap is absurd on almost every level, but at the height of my preoccupation its absurdity didn't matter. The film and the actress gave me joy and maybe even a little hope. What kid doesn't need both?
Posted by Bill Cameron at 7:00 AM