Love Letter to a Childhood Crush by Jody Casella

He was always fourteen. Maybe at some point he turned fifteen.  But that was way later.

He was an orphan. Red-haired. "Husky," they called him. I didn't know what that meant, but I pictured him as strong, sturdy. His name was Jim Frayne. The first time I met him he was on the run from his evil stepfather. Holed up in a mysterious, abandoned mansion. He slept on an old mattress.

Now the mansion was crumbling into the hillside. No matter, Jim could take care of himself. He would never go back to his evil stepfather.

Good thing he was smart. Brave. Resilient. He knew his way around the woods. He could follow animal tracks. Suck the venom from a Copperhead bite. Set up a camp. Start a fire with two sticks. He was compassionate too. His lifelong dream was to open a summer camp for boys. Boys like him. Boys in trouble.

Shocking plot twist: that mattress he slept on was stuffed with a million dollar bills! But Jim wouldn't figure that out until the end of the book. 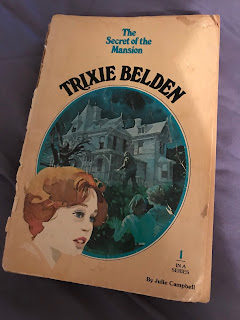 Trixie Belden and the Secret of Mansion was the first real book I read. Age eight, I curled up with it, a little intimidated. I'd never read a book so long before. And there were no pictures. Unless you counted the ones on the inside cover, the drawings of the main characters.

Trixie, of course. The tomboy. Prickly and stubborn. Determined. Loyal. Her older brothers, Brian and Mart. Her best friend, the poor little rich girl Honey Wheeler. And her other best friend, Di, a sweet girl with violet colored eyes.

Jim Frayne, the runaway boy Trixie and Honey discovered sleeping in the old mansion on the hill. 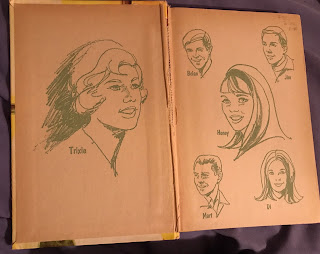 I read the Trixie Belden books at a sad, vulnerable time in my life. Age eight, nine, ten. A shy, scared, weird, little girl. My father had died. My mother had remarried. My stepfather, I'd learned quickly, was not the wonderful man everyone said.

Oh, how I loved these books! I read them-- all sixteen books in the series-- over and over, and I can't quite explain why. The clever (I thought) mysteries. The realistic (I thought) characters. But it was more than that. It was the group of friends banding together. The loving Belden family. "Moms," as Trixie called her mother, and Dad, looking out for the kids. Making a safe, happy place to come home to after the day's adventures.

And Jim, that rough around the edges, but darling boy.

Honest to a nearly ridiculous degree, Jim knew Trixie's faults.  Her impulsiveness. Her tendency to blurt stuff out and regret it later. But he loved her anyway. Jim was kind. Brotherly. And then, sometimes, not so brotherly... giving Trixie a special bracelet to wear. Squeezing her hand after a particularly scary, climactic moment.

I think now that Jim Frayne was probably my model for ideal maleness. A little girl without a father, with a not so good stepfather, I needed to know a boy like him existed. 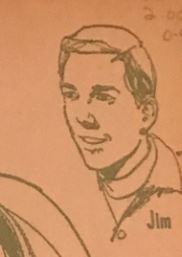