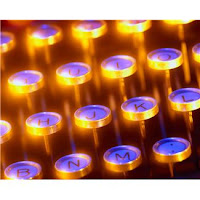 All hail the typo! Much cursed and often maligned, the lowly typo deserves more appreciation. After all, the typo is about surprise and the unexpected. There you are, writing away at your brilliant manuscript, thinking you know exactly where you're going and how it will unfold. Maybe you even have an outline (lucky you). Though you wouldn't admit it, there's a smug look on your face because for once you're in control of the project, and you think - no, you know - it's going pretty well. So you stop and read back over what you've just typed.

And then there it is. The typo of wonderment.

I'm not talking about your ordinary, everyday kind of typo, like "hte" or "evry." I'm talking about the transformational typo. The kind that carries a whole potential story in one little misplaced letter.

My favorite typo of all time appeared while I was writing Wildwing. Addy has time traveled to the Middle Ages, where she's mistaken for Lady Matilda, ward of the king. In this scene, she's attending a church service for a shipload of people drowned at sea, and she's the only one who knows that the

real Lady Matilda was one of the victims. She's shaken and tears are running down her cheeks. As the service ends, the priest walks up to her, takes her hands in his, and says, "It is hard. I know it is hard. But the Lord does not give us a greater burden than we can bear."

Addy is speechless. So was I when I read what I'd typed next:

The priest is still holding my hands. "But life brings us boys to balance the pain," he says.

Of course! Thanks God for them, those boys who balance our pain.

Now, what I'd meant to type was, "life brings us joys to balance the pain," as the priest goes on to tell Addy he's looking forward to the joyous occasion of her wedding to the lord of the castle. But when my fingers slipped and typed that errant "b," maybe it was my muse giving me a nudge*, eager to get back to the real romance in the book: that handsome boy Addy just met, the falconer's son.

I think we all appreciate the big surprises of writing--the scene that takes us places we never expected, the book that reveals its true meaning to us only as we write the last chapter. But let's enjoy the little surprises as well. Spread your own joy by putting your favorite typos in the comments box. Come on, 'fess up!

*By the way, the first time I typed this, I left the "g" out of "nudge." Naughty, naughty muse.
Email Post