I'm Not Afraid. To Take A Stand

I’m a fan of Eminem. I can’t resist him for reasons that are probably buried deep in my soul. (or not so deep depending on the day) It’s weird. I mean, you wouldn’t think I’m exactly his target audience. (forty*cough* something me and all) On the other hand, maybe I am.
I’m a mom. And he always expresses deep love for his kids, (albeit not always appropriately). He’s angry.  I may or may not have anger issues of my own.
Anyhow, to me Eminem is incredibly conflicted. He has obvious talent, guts and ambition but seems to fight an incredible self-sabotaging gene. As if he’s afraid he doesn’t deserve the good things that happen to him, so every now and then he has to f*(K up to balance it out.
But I love him. Despite that or perhaps because of that. Even with his potty mouth. Maybe it truly is a mothering instinct. Or maybe it’s my writer’s instinct. He would make an amazing character in a Janet Gurtler book.
For a couple of weeks I’d been wondering what to write when it came my turn to blog about what YA Outside the Lines means to me. Then it hit me. On the treadmill. At the gym. Eminem’s song came on. I’m Not Afraid To take a Stand
“Holler if feel like you’ve been down the same road.” Eminem
Well. I have been you crazy rapper, you.  And I realized for me, that’s where the core of my writing comes from.
My characters always come with a fair amount of baggage, because to me, that’s truth. Everyone has issues. Or challenges. No one’s life is as perfect as it may seem on the surface to others looking on. Everyone has things they try to hide from the world. Maybe the pretty cheerleader has a dad who drinks too much. Or a bi-polar mother. The bully. Well. What’s bugging him?
The lines of acceptability are blurry to teens. What’s acceptable to adults and what’s acceptable in the world teens live in may not always be congruent. Teenage years are about trying desperately to fit in and find one’s place in the world, but also trying to define who we are and how we can escape the roles and expectations heaped on us by ourselves, our family and society in general.
So I write about the things I think teens deal with in one way or another. Things I struggled with. Addiction in myself and those around me. Health issues. Self-destructive inclinations. People making mistakes.

Sometimes I’ve really wished I could, and I’ve even tried to write “inside the lines.” Or what some people might consider acceptable. Fun, light stories! (which I am in no way putting down or saying are not wonderful books that I enjoy reading-- they just don’t flow from my soul)
But as light as I try to go, my characters always seem to reveal flaws in themselves or those around them. Things outside the acceptable lines. Drugs. Sex. Infidelity. Anger vs. pride, self-loathing vs. overconfidence. People don’t always do the right thing.
And yet. In the end, like Eminem, (in his own messed up way) I hope my writing is not hopeless, rather hopeful.  Some of my characters may fall outside the lines of what some people consider acceptable, yet outside the lines of acceptable behaviour is often where people find themselves. To me the beauty is finding the strength to come back.
Janet Gurtler, Author of  I'M NOT HER, Sourcebooks, April 2011
“I guess I had to go to that place to get to this one.”
“I’m not afraid. To take a stand.”
Eminem 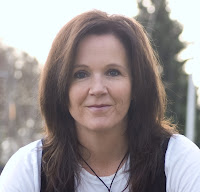