The Mixed Tape of Jobs 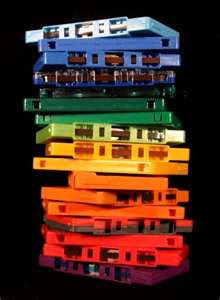 After I read Steph's posts about her other jobs, I got to thinking about all the jobs I've had since I started working at tweleve. Working so many different jobs really comes in handy when your main character needs a job.

I started out babysitting in the seventh grade. I'm the oldest of five kids so I had plenty of experience at home. I continued to babysit all the way through college. But as asoon as I turned fourteen, I got a "real" job with a pay stub. I lasted all of two days at Priscilla's Love & Gourmet and then gave my two day notice. I was hired to wash dishes with my friend Nell. She enjoyed washing dishes. Me, not so much. Plus, I was hungry after school and was afraid that I'd be caught with a meatball in my mouth. From there I went to work at the Music Box where I really enjoyed. I worked in the greeting card department. It was a lot of fun because Nell worked there with me but we had a boss that was a little odd. She liked to sashy by us a little too close.

After eight months I quit and took a job at Photo Wizard, a video and photo store. I worked there for four years. It was a blast, filled with interesting customers that could fill volumes of books. We did carry X-rated films so that always brought in an intersting crowd. Plus our boss was pretty lax. The only rule was that you could not wear a tutu to work.

I also worked at two different supermarkets, an Italian restaurant, a catering company, as an office temp, the YMCA gym and a movie theater. I met my husband at the movie theater in college so that was definitely a highlight. Well, that and the free movies, lol!

On the more professinal side I worked at several radio stations, as a newspaper reporter and wrote advertising copy for a medical advertising company. One year I had seven different jobs to claim for on my tax returns. I usually had at least three jobs at once. And I knew it was all for a purpose because now I have tons of material to pull from when writing my books.

After that I worked as a copy writer for a computer graphics company, then as a tutor and a middle school teacher. After that I taught adult ed. I enjoyed every one of these jobs because they each offered something different and I have met so many cool people over the years.

What was the coolest job you had in high school or college? I think mine was the temp job I had at FAO Schwartz. I was a toy demonstrator and played with oversized blocks all day. All though their theme song, Welcome to Our World of Toys kind of got to me after listening to it ten hours straight during the holiday season.

I think one day I will make a song mix with theme songs for each job that I've had over the years. It's going to be quite an ecclectic mix!
Email Post