I Meant To Do That

Writing is magic. There I said it. Sometimes people ask me how you write a book and although I've written several of them by now the honest answer is that I don't know. I sit down at the laptop, press play on the DVD player in my head and let the movie run as I write down what happens. Many times I'll go back and read something from a previous writing session and think "wow, I wish I wrote that". Crazy I know.

One of the most magical things that happens while writing is the happy accident. Many times a name you pull out of thin air will end up having a deeper meaning to the character. I was writing a story a few years ago and naming characters randomly - whatever popped into my head first stayed. One of the main characters was a girl who secretly liked opera (something that I don't really share) and the name Mimi just seemed to fit. As I was doing research, I had coffee with Mark, a friend who works for the opera and knows everything about it. I explained the character like I always did (as if she was a real person) - that she was a foster kid who pretended to be tough, but loved opera and wanted to be a singer. As I told him that her name was Mimi, but that she'd changed it from something else (although I didn't know what the something else was) his eyes got wide and he commented that I must really like La Boheme. Huh? I'd heard of it of course, but I'd never listened to La Boheme or read anything about it as far as I knew. Mark looked at me skeptically as he explained that Mimi was one of the lovers in La Boheme and had also changed her name from something else. Goosebump time. 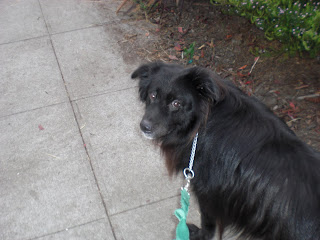 This kind of thing happened a lot with DIRTY LITTLE SECRETS. I do a lot of my thinking while walking the big hairy dog around the neighborhood. I was doing some setting planning on one of our walks and had to come up with the name of the street where my character lived. I looked up, noticed that I was standing on the corner of Collier St and Bridge Drive and decided that Collier sounded right. I didn't think about it again until after the book came out. One of the reviewers pointed out that I'd cleverly named the street my character lives on after the Collyer brothers -

infamous hoarders from the early 20th century. And it would have been clever if I'd done it on purpose.

All of these happy (or perhaps subconscious) accidents happen when you leave yourself open to possibilities. If you're thinking of a name for a character or a place, grab the first one that passes through your mind. - it might have more meaning than you realize.

And always, when someone points out the brilliance of your choice, say both to yourself and out loud, "Yeah. I meant to do that."
Email Post