I (the "I" here being Holly Schindler, blog administrator) am thrilled to announce that one of our newest regular bloggers here at YAOTL is Rachel Harris, whose debut novel, MY SUPER SWEET SIXTEENTH CENTURY released this month!  To introduce our followers to Rachel, I asked her to swing by the blog during her blog tour.  I love the passion that drips from Rachel's words as she speaks of her own work, and as you read our convo below, you will, too:

Congrats on your debut, Rachel!

Thank you so much! This certainly feels surreal =)

Please tell us about MY SUPER SWEET SIXTEENTH CENTURY:

Sure! My Super Sweet Sixteenth Century is about a young daughter of Hollywood who unfortunately hates the spotlight and is being roped into a huge televised birthday gala by her well-meaning dad and future-step-mother. They bribe her with a trip to Florence, a city she’s been fascinated with forever because of the ties to her birth mother (the one good thing about the woman), and while Cat’s there she discovers a gypsy tent. Needing to do something very un-Cat-like for once, she decides to be wild and steps through the open flap…and soon after exits in Renaissance Firenze.

With nothing but a backpack stuffed with contraband future items, Cat soon befriends her ancestors and gorgeous artist Lorenzo. Her many cultural missteps aside, Cat’s enjoying her Renaissance vacay (as she calls it) until an older man filled with creeptastic amore starts sniffing around. As she struggles to find a way back home, and her own century, she realizes that perhaps an unwanted birthday party might not be the worst thing in life.

What was the inspiration behind MY SUPER SWEET SIXTEENTH CENTURY?

Once I decided I wanted to write a story where a modern-day girl gets sent to a historical setting, I got stuck choosing an era. I love Regency novels but I also love research, and I’ve learned a lot about the Regency period already, thanks to my book reading obsessions. So after talking it out with my husband, the sixteenth century leapt to mind due to my fascination with the Renaissance and Romeo and Juliet as a teen, not to mention it would then lead to it being set in Italy, a beautiful country filled with history. (The delicious boys and sexy accents didn’t hurt, either.)

But even once I had the setting and the era, I still needed inspiration. I always start with my characters, interviewing them extensively, choosing pictures for them, and making a collage. Then I create a story soundtrack that follows the internal arc of the main character and the major plot lines, so that while I'm drafting, I have a song or two that speaks to the chapter I'm working on. I often turn to the song lyrics to help me add imagery or an internal thought that drives my point home in new ways. It was at this stage that I found the song Love Story by Taylor Swift, and shortly after the video, which is filled with such rich visual inspiration. The song itself ends up playing a key role in the soundtrack.


What’s been your journey as an author?

My journey began in the summer of 2010 when I read the Twilight series. I fell back in love with reading for fun, and with the entire YA genre. By the end of the summer, I’d decided to try writing my own book. I quickly found a local writing group, dove straight in, and was querying my first novel by Thanksgiving.

I’d read that you should go straight into your next book, not sit around waiting while you query, so I started writing My Super Sweet Sixteenth Century in early 2011. I came up with the idea toward the beginning of January, spent the rest of the month in research, and wrote Chapter One in February. That book was with agents by mid-April. I signed with my fabulous agent in August, and found my home with Entangled Teen a month later. It’s been like a dream.

What’s been the best part of having a book in development?  The biggest surprise?

The best part is the friendships I’ve made, hands down. Everyone at Entangled has been amazing. The entire editorial team is made of awesome, especially my own editor, Stacy Abrams. She knows her stuff, isn’t afraid to show you how to make a story better, but she’s a total sweetheart and encourager at the same time. And funny! And the other writers….we say we’re a family at Entangled, and we really are. All the authors have been so supportive, especially my fellow Entangled Teen girls. Those are my peeps!

The biggest surprise….how scary it isn’t. It’s like, I knew that editors were just regular people, but I never really thought I could become friends with them, or that they’d care just as much about my book as I do. They’re totally on your side. Oh, and that they don’t freak if you don’t agree with every suggestion or question they have. They understand it’s your baby, and are just trying to make it the best it can be—and boy do they do that!

Has seeing a book through development changed your writing at all?  If so, how?

Yes! Actually, my writing changes ever so slightly with each book. I mean, it’s still my voice and style, but I grow with each book—I handle certain things better, and other elements come quicker. But working with Stacy taught me where to focus, where my strengths are, and how I can increase tension and conflict. Really, the entire editorial process was educational, but my favorite part was copy edits. It’s so much easier to spot redundancies, repeated words, and overused gestures when it’s not your book, but my tics are my tics for a reason, so they stay invisible to me without the help of other people. Along with those strengths I mentioned, my editor really helped me see where my weaknesses were, too, and I like to think I’ve grown because of it (*grin*)

Every author, it seems, has a favorite writing “trick”—reading work out loud, brainstorming while going for a walk…What’s yours?

My favorite trick is definitely my story soundtrack. I burn CDs and have one in the car and one in my laptop. The laptop one I use occasionally before I write a scene to help get me in the mindset and emotional place I need to be in, but the biggest help is the one in the car. As I drive, I sing along to the lyrics and reflect on how they fit where my character is in their growth, why the words speak to their situation, and I always come back home needing to jot notes down. Sometimes entire scenes are changed just from listening to these lyrics, and they’re almost always made better by helping me dig deeper or add more romance or add a bigger dose of humor….I heart my soundtracks!

Please tell us about future books in the works:

In this series, I have a companion novel, A Tale of Two Centuries, that I just completed and sent to my editor. It comes out in June 2013. This was a fun twist because it’s Cat’s sixteenth-century cousin Alessandra who time travels to present-day Beverly Hills. This one is longer and I think goes a little deeper—not to mention a bit swoonier. I had a lot of fun with the romance in this one. Actually, I had a lot of fun with all of it.

Then next December, six months after Alessandra’s story comes out, I have a third book that is completely unrelated, but also with Entangled Teen. Rearview Mirror is a YA thriller with paranormal elements set in my hometown of New Orleans. I’m really excited about this book—probably because I’m drafting it right now!

After that, I have four YA story ideas and a sweet adult romance in the works….we’ll see what my editor wants me to work on first  =)

What are some common themes in your work? What can we always expect from a Rachel Harris novel?

I adore this question! Before I started writing, I researched the industry a lot, and I came across a blog post from an author who mentioned that all of her books have a similar theme at their heart. That statement really resonated with me. I love the idea of a reader knowing what they are getting at the heart of all of your books, so I sat down and thought, “What would I want a reader strolling through a bookstore and scanning author names to think about when they land on my name?”

I came up with a list of adjectives and words that I wanted my books to represent, regardless of genre. It could be YA or adult, contemporary or paranormal, but I knew I wanted certain things to be at their core—my so-called brand. And the tagline I came up with for my brand is Unmask Your Inner Flirt.

I’ll break down what that means to me.

First, I believe people wear masks of different kinds, and at different times. Some are obvious, such as a makeover to get attention, trying on a new role, or trying to be someone we're not. Others are more subtle, such as a character hiding behind a mask of perfection, afraid to make a mistake, always needing to be in control. All the main characters in my books deal with this in some way. 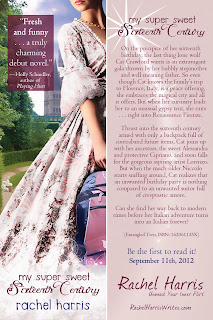 For Cat, hers is a mask of perfection she wears because her estranged mother is a Hollywood star known for scandal, and she’s always trying to overcompensate by never messing up in public, and never letting people too close. It was by getting her out of her element, out of a scene she can control and into one that she can’t, that she’s forced to deal with these things.

(Fun side note: On my soundtrack, Cat's internal arc starts with Poker Face by Lady Gaga because she always wore that mask, and by the end, it’s Love Story because she’s opening herself more to the possibility of love.)

The second part of the brand comes in with the romance. I’m a sucker for a good love story, a happy ending, and humor along the way. To me, the word flirt represents the fun part of the romance, where you might laugh at your relational missteps or get the butterflies in your tummy from just looking at the guy. Those moments will be in every one of my books, too.

I think we all wear different masks at different times of our life, whether we know it or not, and I believe deep down there is a flirt in each of us….a girl (or boy) who loves falling in love and enjoys being swept away with a new romance. And that’s why at the heart of any book I write, you’ll always find these themes.

GIVEAWAY ALERT:
...Super-sweet Rachel is also including a giveaway with this post.  One lucky winner will receive a copy of MY SUPER SWEET SIXTEENTH CENTURY, along with a signed swag pack.  The swag pack includes trading cards of Cat and Lorenzo, a Super Sweet tattoo, a bookmark, a signed bookplate, and a 'super sweet' bracelet.  Our giveaway winner will be announced on September 29th.

Click here for an additional chance to win MSSSC swag!