pens in their pockets 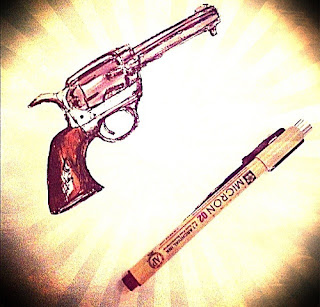 
At lunchtime, my best friend and I hid in the band room, surrounded by a forest of music stands. Or we carried our brown paper bags to the Tombstone, a slab of rock tucked behind the oak trees. As the rest of 10th grade marched off to the cafeteria, we snuck out of the line. The noise and greasy smells of the campus felt like a prison. As I drifted through the halls, I imagined a Wild West soundtrack in my head—Sergio Leone’s theme strumming its chords.

My high school didn’t look like the Wild West, but it often felt that way. The unspoken rules were all about survival. On the outside, I was quiet, always doodling stories with my felt-tipped markers, a “freaky girl” like Fin in TOTAL CONSTANT ORDER. I wasn’t given a chance to start over like Aaron in NARC. Secretly, I was praying for escape. Comic books and movies were everything. That’s where I searched for a reflection, a like-minded ghost looking back at me.

Last year, I listened to Kelly Reichardt give a talk at the Museum of the Moving Image. She spoke about her beautiful film, MEEK’S CUTOFF, and how it gives a different perspective of a familiar genre. Instead of the wide open spaces of traditional Westerns, such as John Ford’s THE SEARCHERS, her lens is almost claustrophobic. No horses galloping across the Technicolor plains. No sweeping vistas dotted with mountains. Her film reveals a more personal viewpoint…the way the long journey might have looked to the settlers’ wives.

Reichardt tells her story through a square-shaped frame, as if we were riding inside the covered wagons with the women. In the opening scene, they slog through water, lifting things above their heads (including a bird cage that will later be empty). In another scene, a character struggles with a shotgun that takes forever to load. What they see, we notice, too. It’s not always what you expect.

“By telling stories, you learn how to tell stories,” Reichardt said at the museum. She also mentioned how it’s important to “stay private” and develop your own style and voice…and sometimes it takes courage. As storytellers, it often means stepping outside the lines. That’s where you’ll find many YA protagonists, the kids on the fringe who are silent, but watching, with a felt-tipped marker tucked in their back pockets.
Email Post