Writing on the Physical Fringe - Guest Post by Ripley Patton


Most of us have felt “other” at some time in our life. We’ve felt like an outsider, obviously different from those around us, but keeping that secret tucked away deep inside of us where no one can see it. We strive to blend in, a natural survival mechanism. Standing out gets you singled out. Singling-out is what tigers do to a herd of antelope to catch and eat the weakest one. Looking like everyone else is an instinctual way to protect ourselves. Wearing the right clothes. Having the right hair. Covering up the zits. Acting like everyone else even when we know we’re not. It’s all part of the survival mode of a teen.

But what happens when you can’t hide your difference? How does the teen blend who has a birthmark on their face, or rolls into class in a wheelchair every day? How does the blind or deaf kid survive the rigors of being singled out, the daily gauntlet of acceptance or rejection?
­­­­ 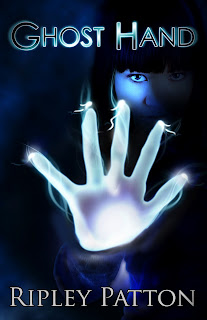 In my upcoming YA novel, Ghost Hand (coming November 2012) the main character, Olivia Black, is born with a rare birth defect known as Psyche Sans Soma or PSS. Instead of a flesh and blood right hand, Olivia is born with a mass of ethereal energy emanating from her right wrist.­­­­­ Olivia has been different all her life, but when her ghost hand suddenly develops the ability to pickpocket people’s souls, Olivia discovers just how deeply some differences go.

Making Olivia a character on the physical fringe was no accident.

My older brother was born with a cleft lip and cleft pallet. The inside roof of his mouth, his upper lip, and the tubes in his ears did not finish forming and, as a result, he had to have many surgeries to repair these defects. He spent every holiday and school vacation in the hospital. He didn’t just feel different on the inside. Everyone that looked at him saw his difference.

As for me, I was his little sister and I looked up to him. I thought he was brave, and stoic, and amazing. His senior year of high school it was finally time for his final cosmetic surgery, the surgery that would make him look like everyone else. But he went to my parents and said, “No.” He told them he wasn’t having that surgery. Looking like everyone else just wasn’t that important to him anymore. And he never did have that surgery.

I have always found myself drawn to stories with physically different characters. One could argue that fantasy and sci-fi, with its comic book super-abled heroes and heroines, is all about taking what society views as a disadvantage and using it to overcome things. My brother didn’t have the choice to blend in with the crowd. He had to stick out, and that made him vulnerable, but it also made him strong. Those are the kind of characters I like to write, and read. Still, we should be careful to avoid common stereotypes and tropes of the physically different character.

Here are a just a few to watch out for:

1. The difference is used as an outward and visible sign of inward evil. This is used all the time in comic books. The villain is defined by his disfigurement (Two-Face from Batman, for example).
2. The different character either dies or is miraculously cured (see this article, 20 Characters Who Got Their Legs Back), as if there is no in-between, no real way of living with a physical difference.
3. Physically different characters as Christ-figures, super-crips, or vehicles for pity.
4. Physically different characters with no romance or sex life.
5. Unrealistic extremes, no gradients of difference.  A blind person can't see anything, when in reality many blind people can see shades of light. The only kind of Tourettes is the kind where one blurts out obscenities.

Here's an excellent WEBSITE on disability tropes to avoid, or think carefully about before using.

And HERE is a blog post of mine with a list of some great fiction containing physically different main characters that break many of the tropes.

Now, I hope you feel inspired to write a story featuring a physically different character, and I have just the place for you to submit it if you are a writer between the ages of 13-19. Beginning October 1st, 2012 I am running a YA by YA Short Story Contest on my website. Rules and guidelines for the contest can be found HERE. Prizes include cash, signed copies of Ghost Hand, and publication in the Ghost Hand series book two, Ghost Hunt (coming in 2013). And don’t delay because the deadline for the contest is November 15th, 2012.

If you aren’t a young writer, please pass on the link for the contest to someone who is.
Email Post