Why write about sexuality if you're not gay? (Lauren Bjorkman)

My debut YA, My Invented Life, centers around big SECRET that drives a wedge between sisters that used to be close. The secret has to do with sexual identity. When the book hit the stores, interviewers often asked me what inspired me to write it.

This question always made me squirm. The easy answer would’ve been, “I wish that funny, uplifting stories with lesbian an bi girls existed back when I was a teen.” Unfortunately that would've been a lie. I am not lesbian or bi. I don't have any LGBT family members. Nor LGBT friends in HS. The challenges of growing up gay did not occur to me until much later. I’m that lame.

In fact, my biggest post-pub fear went something like this: LGBT readers and authors would scoff at my lack of “credentials,” laugh in my face, call me a fraud, or much worse. (False alarm, btw. I learned later that people like me are called allies. I felt very appreciated by the LGBT community.)

Luckily, the interviews were written, so I had time to develop cogent answers.

Reason A: I was inspired by events around my high school reunion. A number of my classmates came out around then. I asked a few about their experience in HS, and was somewhat horrified by their answers.

Reason B: I wanted to write an uplifting story that focused on a friendship between sisters, and how a secret can ruin a friendship. I didn’t want the “coming out” itself to be traumatic.

However, the biggest reason didn’t occur to me until after the book got published. Here it is:

I can identify with the pain of LGBT teens that hide their true selves from friends because I grew up in the same situation.

My mom died when I was five. She didn’t die in a car wreck, of cancer, or in any tragic, yet socially acceptable way. She killed herself. My Dad insisted that my sister and I keep it a secret. I mostly did. But the secret made me feel ashamed. Dark. Dishonest. Disconnected. Fringe.

And that is why I believe in telling the truth, even if it makes others uncomfortable. Some day, I hope to live in a world where we aren't afraid that others might judge us for who we really are. 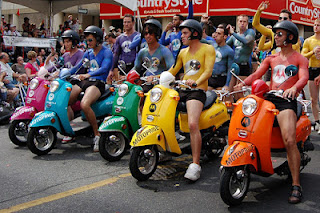