When I first met my husband, he was the bassist in a local band called Love Gas. He also booked bands at a corner bar called The Budapest Cocktail Lounge, and produced comp discs featuring bands from the scene. This was back when comp discs actually needed producers, before you could burn them in your own home, or bypass the disc altogether and release your music digitally. Anyway, he had just produced a CD called New Brunswick Underground and we met for the first time when I interviewed him for a column I wrote called Jerseyside. I was a freelance writer and a minor music journalist—“minor” being the key word here to describe both myself and the majority of the indie bands I covered.
We both had day jobs, but music and bands formed the core of our social existence back then. We had been dating a year when we got the idea to start publishing a music ‘zine, complete with a CD, featuring local artists. We called it New Brunswick Underground. I was the editor, which meant I wrote most of the stories for the first few issues at least. He was the publisher and managed to gather enough ad revenue for us to print about 300 copies each quarter.

Eventually, our staff grew to include two graphic artists and a devoted pool of passionate, freelance writers, who turned in some great copy and never complained about not getting paid. It was a ton of work for zero money and I loved every minute of it. But our attempt to become the next Jann Wenner and Lester Bangs was not without its share of Spinal Tap moments.


This month we’re blogging about fools, and there were many times I felt like one as I tried to navigate the world of rock journalism. I once left Rob Thomas on hold to answer a call from another band—it’s one you’ve never heard of, in case you’re interested, and Rob Thomas was extremely cool about the whole thing. And then there was our very first issue, which came back from the printer with a front cover that was completely unfocused. To paraphrase Nigel Tufnel: “It’s like how much more blurry could this be? And the answer is none. None more blurry.” Or the time I covered a local band called The Stuntcocks and repeatedly referred to them as “The Stunkcocks” in my article. It was an honest mistake, not some subconscious desire to sabotage their name, but they were still pretty pissed. 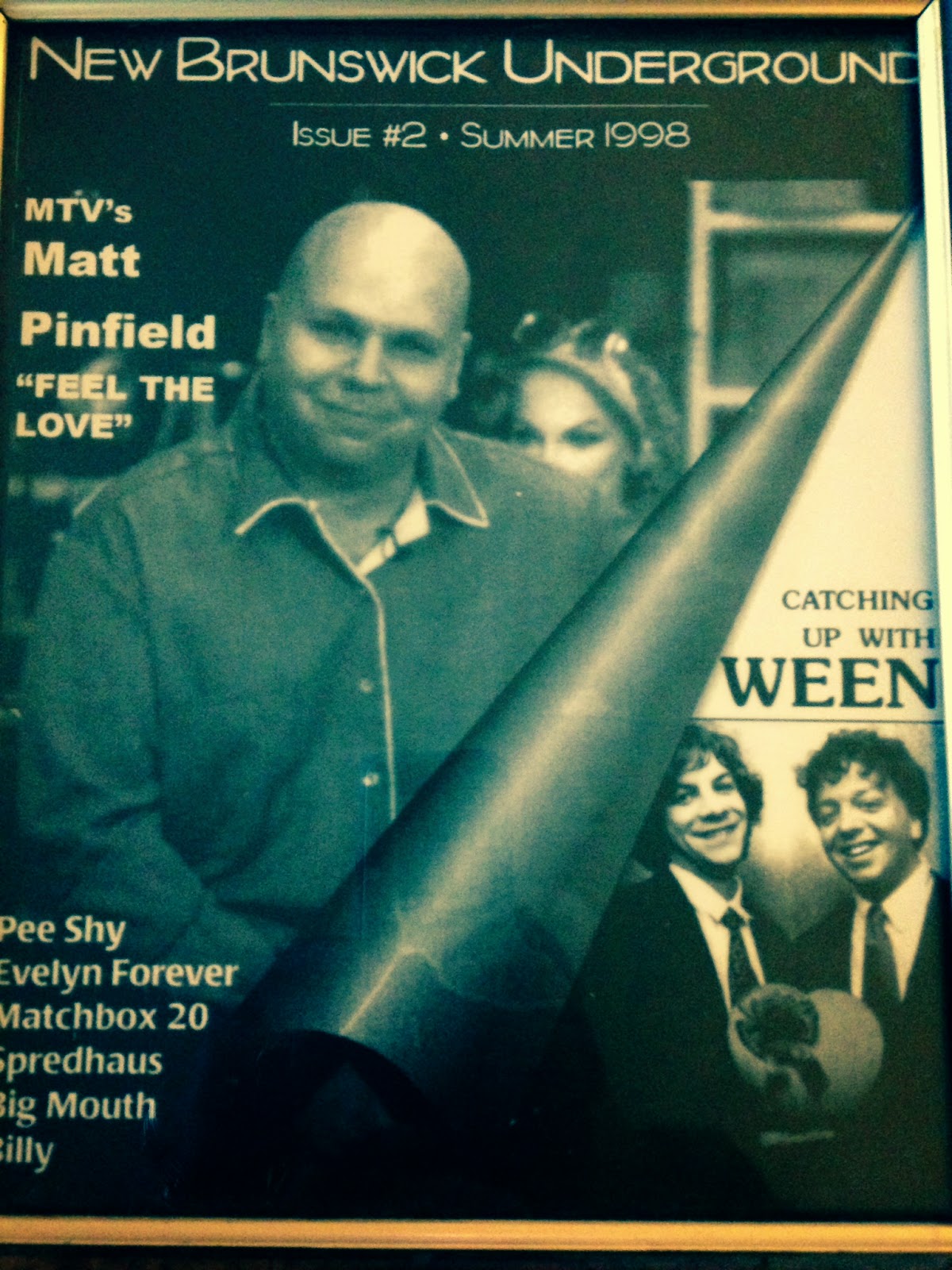 But perhaps my most memorable foolish moment from my four years editing a music zine, was when a local radio station invited a representative from our New Brunswick Underground to interview legendary Led Zeppelin bassist John Paul Jones. He was going to be at the WRAT-FM at the Jersey shore early one Sunday morning to promote a solo album, and a bunch of reporters had been invited to do a little press junket. We were going to send Jon Andrew, one of our best writers and a bassist himself, but somehow, the night before, as we sat around drinking beer at The Budapest, the whole thing kind of snowballed to include Jon, his girlfriend, Sarah, who also wrote for the zine, me, Mike, and a girl named Sandi, a bassist and local scene-ster. Sandi never missed an event.


So on the morning of the interview, we piled into one car and busied ourselves making up Farley-esque questions for John Paul Jones like: “You were in Led Zeppelin right?” or “When you go to Guitar Center, do you play Stairway to Heaven on the guitars?” or even better, “So like, did you influence yourselves?” Oh yeah, we laughed until coffee came out our noses.
When we got to the radio station and rang the buzzer to be let in, the woman who answered the door was not happy as her eyes panned over our fivesome. When we stepped inside, we saw that The Star-Ledger had sent one reporter, as did The Asbury Park Press. A few weekly papers sent either one reporter or one photographer. Unlike, New Brunswick Underground, no one else came with five reporters, one digital camera, a notebook and a pen. Still, we thought the station was cool with that. I mean, they did offer us more coffee and bagels as we sat in a row on a long leather couch next to a huge air-brush painting of John Paul Jones. The work’s artist, a long-haired dude in a backwards facing baseball cap, stood beside it.


Finally, a super-stretch limo pulled into the parking lot and in walked a very fit, nicely tanned, John Paul Jones. We all gave him a standing ovation and when the applause tapered off, airbrush artist dude started yelling, “John Paul! John Paul! Can you take a picture with me and like your picture?” John Paul was very sweet. He told the guy he dug his painting, signed it for him, and posed for a quick pic. Then he was whisked away into the studio by a dee jay named Keith, and a few reporters followed. Or so we thought. When all the commotion died down, we realized the five of had been left alone, sitting on the same leather couch. Even air brush painting dude had gone. And yet somehow we still thought we’d get our chance to speak to John Paul Jones.
Fast forward forty five minutes. John Paul Jones emerged from the studio and headed for the door with his entourage. Bewildered, we followed him into the parking lot. It is only then that it dawned on us that the best we could hope for was a picture and an autograph. For some reason, it was decided the photo should be “bassists only,” so Sarah and I stepped aside and offered to take the picture while Mike, Jon, John Paul Jones, and Sandi lined up against the stretch limo for a photo. It would have been a nice photo too, if it hadn’t been for this tall stranger who photo bombed it at the last second. Seriously? Before he left, John Paul Jones signed a copy of New Brunswick Underground for us. As I sit here writing this, I just asked Mike what became of that signed copy. “No idea,” he said. Sigh. 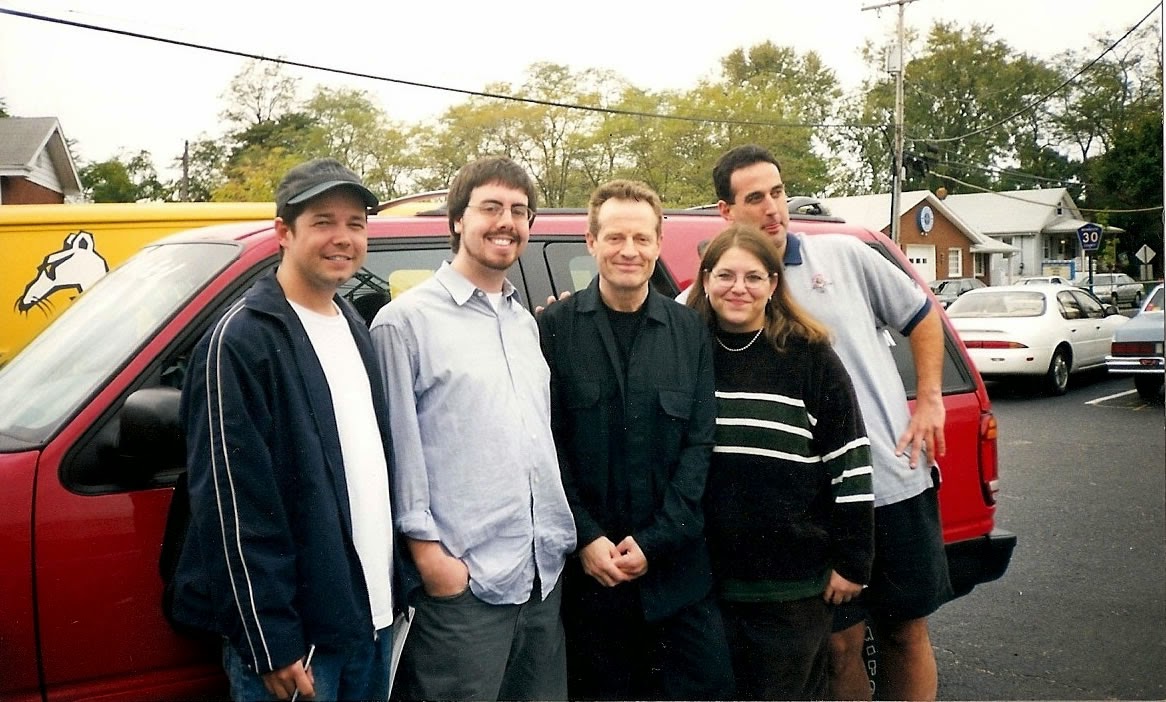 (Mike, Jon Andrew, John Paul Jones, Sandi, unknown stranger. Jen and Sarah non-pictured.)
As John Paul Jones’ stretch limo pulled away, once again, like the ship of fools that we were, we stood around clapping until he was out of sight. We tucked away our list of questions and someone mumbled maybe next time as we retreated to car. Me? All I could hear was Chris Farley’s voice echoing in my head as we drove away… stupid, stupid, stupid.
Posted by Jen Doktorski at 3:00 AM